The Corruption of Capitalism

A strategy to rebalance the global economy and restore sustainable growth (CLSA Books, 2009)
The global economy is in crisis. The financial system has failed, international trade has contracted sharply and unemployment has soared. Only a multi-trillion dollar government intervention is preventing a worldwide breakdown on the scale of the Great Depression.

In The Corruption of Capitalism, Richard Duncan provides a clear and comprehensive explanation of how this calamity came about. He also offers a strategy to permanently resolve it. The book is divided into three parts. Part I describes the present state of the global economy and the government life support keeping it afloat. Part II details the long series of US policy mistakes responsible for this disaster. Part III outlines the actions required to restructure the US economy and restore global economic growth.

Capitalism has been corrupted by paper money and debt. Sustainable prosperity will require a return to economic orthodoxy. This book maps the way back.

Order The Corruption of Capitalism 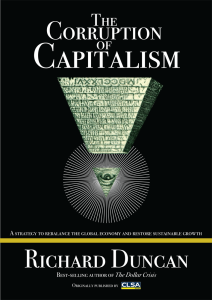 Reviews of The Corruption of Capitalism

Richard Duncan’s well-researched and highly readable book demystifies the belief that the Fed “solves” problems, when in fact it’s directly responsible for the present crisis. Full of interesting figures and insightful comments, The Corruption of Capitalism will greatly broaden investors’ knowledge. It is a must-read for those who wish to preserve their children’s wealth.
Dr Marc Faber,
The Gloom, Boom & Doom Report

An easy-to-read guide to understanding how and why the US response to its self-inflicted crisis addresses symptoms not causes. This is a timely call for radical steps to rescue capitalism from financial and governmental follies.
Philip Bowring,
International Herald Tribune

A lucid and original argument about the causes of financial instability, including the continuing global recession; the book lays out a bold agenda for structural reform, national and international. Anyone who enjoys the company of an articulate, provocative, offbeat intelligence will want to read it. And pick a fight with it.
Professor Robert H Wade,
London School of Economics

Richard Duncan is that rare thing – and economist who is unequivocal. Duncan’s recommendations are music to my ears… I liked this book; I found it clear and informative and tend to agree with his ideas for how to restructure the US economy. Sadly these ideas are too radical to gain general acceptance today so at present it looks like we are in for a repeat of Japan. It makes eminent sense for the US to restructure its economy around “industries of the future” – perhaps one day more politicians will agree!
Tim Tieppe,
SRI Blog, Henderson Global Investors

Subscribe to receive the latest economic news and analysis from Richard Duncan.

You have successfully subscribed to Richard Duncan's blog.