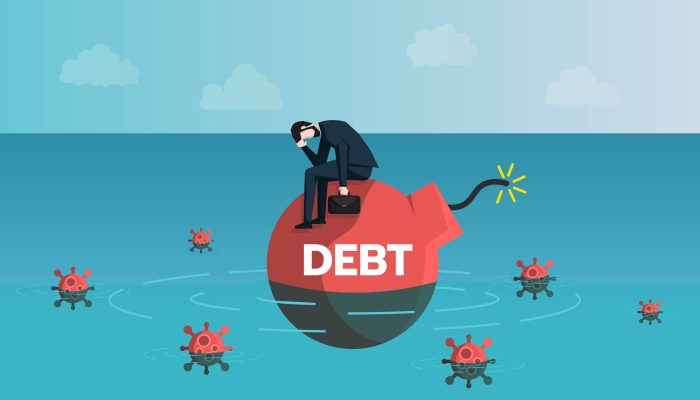 The most important thing to know about macroeconomics in the 21st Century is that Credit Growth Drives Economic Growth.

In the United States, when Total Credit grows by less than 2% (adjusted for inflation), the country goes into recession.  That happened nine times between 1952 and 2009.  Therefore, it is very important to monitor and forecast Credit Growth.

During the first quarter of this year, Total Credit jumped by $2.1 trillion, the most ever in any one quarter and well above the previous record increase of $1.4 trillion in the third quarter of 2007.

The increase in government debt during the first quarter was large, but not record-breaking.  The growth in household sector debt was weak.  Corporate sector debt, however, surged by $656 billion, nearly twice as much as the previous record increase.  This occurred because Corporations drew down their credit lines from banks to avoid running out of cash, leaving the banks much more exposed to potential non-performing loans and loan losses during the quarters ahead.

The debt of the non-corporate business sector, the government-sponsored enterprises, and the rest of the financial sector also expanded at a record-setting pace.

If Congress fails to pass additional rescue bills large enough to hold the economy together during the coming quarters, countless households, small and medium sized businesses and corporations will default on their debt.

Should that occur, the banking sector will spiral into a systemic crisis, credit will contract and the country will be gripped by a severe economic depression that could last a decade or longer.

The new Macro Watch video analyzes trends in credit growth in the US up through the first quarter of 2020 and discusses what these trends mean for our future prosperity.  Macro Watch subscribers can log in and watch this video now.  It is 17-minutes long with 44 slides that can be downloaded.

For a 50% subscription discount hit the “Sign Up Now” tab and, when prompted, use the coupon code:  future

You will find more than 50 hours of Macro Watch videos available to watch immediately.  Click HERE to see the videos in the Marco Watch archives.