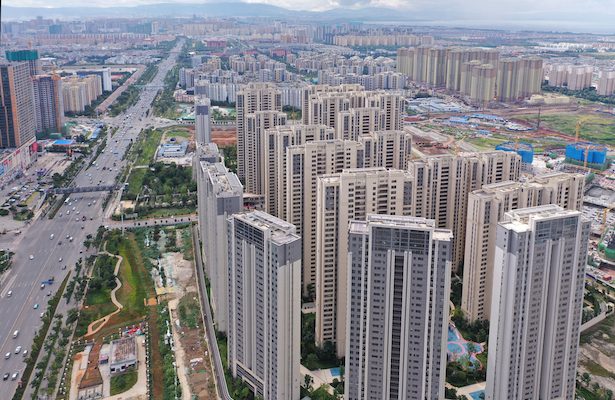 During 2015, China’s economy experienced a serious downturn that caused a global recession.

Credit growth in China had been running out of control, Investment far exceeded Consumption and the rest of the world had signaled that it would not continue absorbing more and more Chinese exports year after year.

In response, the Chinese government attempted to gently rebalance the economy away from its dependence on investment-driven and export-led growth toward more consumption-led growth.  That effort went badly wrong.

Today, Chinese authorities are attempting to rein in China’s oversupplied and overleveraged property sector.  Strict guidelines to limit leverage in the sector have been put in place.  These have caused the enormous property bubble in China to begin to deflate.

China Evergrande, one of the country’s largest property developers, is teetering on the edge of default.  Its liabilities exceed US$300 billion.  The debt of many other property companies is trading at a steep discount to face value.  And junk bond yields have risen to 25%.

Given these developments and the fact that real estate and related industries account for more than a quarter of China’s economic output, there is a growing possibility that China’s economy will once again experience a serious slowdown.

Therefore, this is a good time to consider what happened in 2015 and to review how Chinese policymakers responded to that slump, in order to gain some insight into what they may do this time.

The latest Macro Watch video takes a close look at China’s Crisis of 2015 and the policy response to it.

This video shows that Chinese authorities responded to that crisis by pumping enormous amounts of new credit into the economy, by building even more unneeded property and by expanding the production of building materials still further.

That policy response put an end to the crisis in China and played a leading role in bringing about a reacceleration of global economic growth.  However, it also took the ratio of total credit to GDP in China up from 201% in 2015 to 280% in 2020, it widened the gap between Investment and Consumption and worsened the glut in property, steel, cement, and all other property-related industries.

In short, it exacerbated all the imbalances in the economy that the authorities had set out to reduce in 2015, ultimately leading to the current situation where China Evergrande and probably most other property development companies in China are in danger of collapsing into bankruptcy.

The next video will discuss how Chinese authorities are likely to respond to this new crisis brewing in the country’s all important property market.

Macro Watch subscribers can log in and watch Lessons From China’s Last Economic Crisis now.  The video is 15 minutes long and offers 43 slides that can be downloaded.

For a 50% subscription discount hit the “Sign Up Now” tab and, when prompted, use the coupon code:  Fifteen