Read The Introduction to The Money Revolution 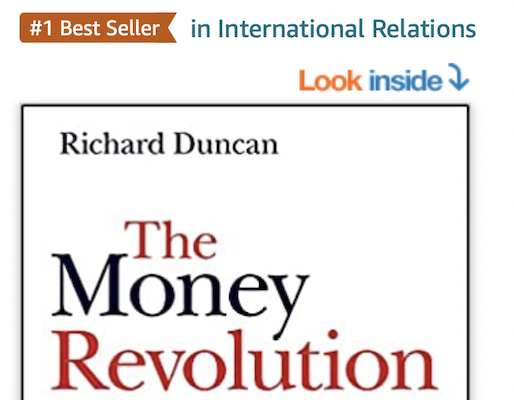 Many thanks to everyone who purchased the book yesterday.

To keep the momentum going, today I am posting the book’s Introduction, which you will find copied below.

After you read the Introduction (or before) please:

Here are the first three pages of The Money Revolution:

Over the last century, wars, depressions, political ambition, regulatory mistakes, greed, and geopolitical competition have entirely transformed the Monetary System of the United States.  They have transformed the very nature of Money itself.  A momentous and irreversible turning point occurred five decades ago when Dollars ceased to be backed by gold.  Afterwards, a world-wide credit bubble took shape that fundamentally changed the structure of the global economy and the rules that govern how it functions.

That bubble and the global civilization it has created will not survive if left to market forces.  Therefore, we have two choices.  We can allow the bubble to implode and hope to live through the ensuing cataclysm which could be far worse than the one that shook the world from 1930 to 1945, following the collapse of an earlier and smaller credit bubble.  Alternatively, we can learn how to effectively manage our new economic system to ensure that it prospers rather than disintegrates.

A dangerous pessimism, based on a misunderstanding of how the economy works today, is becoming entrenched in the minds of far too many Americans.  Proponents of the Austrian School of Economics preach that due to the United States egregious transgressions in abandoning sound money and balanced budgets a harsh day of reckoning inevitably awaits us in the near future, with many arguing, perversely, that since our economic Judgement Day cannot be prevented, the sooner it arrives, the better.

While it is certainly true that the US economy would collapse into a new great depression if the policies advocated by the Austrian economists were implemented, it is absolutely not true that the doom they foretell is either imminent or inevitable.

This book rejects that pessimistic and debilitating philosophy and argues instead that the new economic environment we find ourselves in today presents us with previously unimaginable opportunities to grow and prosper by investing in the industries of the future on an unprecedented scale.  It explains that our economic system has been profoundly altered by the evolution of money and the proliferation of credit over the last century; that, in fact, a Money Revolution has occurred.

Once the nature of our current economic system is properly understood, the correct path forward becomes clear.   If we adopt that path our economic future will be bright.  This book explains how our economy works now and the opportunities it presents us.

The Money Revolution is divided into three Parts.  Part One, Money, describes the evolution of Money and Monetary Policy in the United States from the establishment of the Federal Reserve System in 1913 to the eve of the Crisis of 2008. It also discusses the events that forced the US monetary system to evolve.  These seven chapters provide a history of the Federal Reserve System and explain everything necessary to understand how the Fed conducts Monetary Policy in the 21st Century.  They also demonstrate the colossal power the US central bank has at its disposal.

Part Two, Credit, shows that as the nature of money changed, it brought about a transformation of the economic system, as well.  It describes the astonishing proliferation of credit in the United States during the five decades since Dollars ceased to be backed by gold.  It discusses the impact that very rapid credit growth has had on the US economy and shows that economic growth is now dependent on credit growth.  It also demonstrates that there are effectively no longer any limits as to how much money the United States government can borrow.  Moreover, it shows that if credit fails to expand, the economy will collapse into a depression.  Next it describes the Fed’s successful policy response to the Crisis Of 2008 and its current efforts to support the economy through the Covid-19 Pandemic.  It ends with a survey of the causes of inflation over the last century.

A Money Revolution has occurred and rewritten all the rules of finance and economics.  It presents the United State the opportunity to invest in new industries and technologies on a scale large enough to open up the possibility of curing all the diseases, radically expanding life expectancy, developing limitless clean energy, rehabilitating the environment and solving many of the other most intractable challenges confronting humanity – not generations from now, but in our own lifetime.

The objective of The Money Revolution: How To Finance The Next American Century is to persuade the American public and US policymakers that the United States must seize this opportunity.  If we do, it is certain that the first American Century will not be the last.