Interview: Did Greenspan Lie To Me? 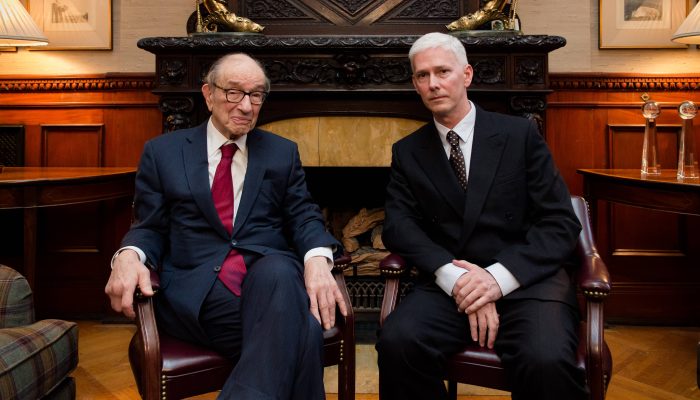 In January 2017, Bill Bonner, founder of Agora Financial, organized a roundtable discussion with Alan Greenspan in the hot seat.  I was one of a dozen participants invited to ask Chairman Greenspan a question at this Agora Research event.  Vern Gowdie was another.

I was recently interviewed by Vern for his Gowdie Advisory Podcast.  (Find the link to the interview below.) We reminisced about our meeting with the “Maestro” and discussed the question I put to the former Fed Chairman: What did he think about the role foreign central banks played in causing the Fed to lose control over US interest rates between mid-2004 and mid-2006, a time when the Fed hiked the Federal Funds rate by 425 basis point but was unable to make the 10-year bond yield move meaningfully higher.

Greenspan replied that he did not agree that foreign central banks had played a role in bringing about the Fed’s inability to move longer-term interest rate higher during those “Conundrum” years when the US property bubble inflated. In our conversation, Vern and I tried to work out whether Greenspan answered untruthfully or whether he simply did not understand the forces that caused the Fed to lose control over the economy in the years leading up to the Crisis of 2008.

To read the full transcript of my Q&A will Alan Greenspan, click HERE.

And that was only the first topic Vern and I discussed.  There were many others, including:

I really enjoyed this interview and I believe you will, too.  I hope you will listen to it now.

After listening to this interview, please consider subscribing to my video-newsletter, Macro Watch, if you have not already.  You will find much more detailed analysis there.

If you have not yet subscribed:

For a 50% subscription discount, hit the Sign Up Now tab and, when prompted, use the coupon code: August

You will find more than 50 hours of Macro Watch videos available to watch immediately. A new video will be added approximately every two weeks.

Click HERE to listen to this Gowdie Advisory interview now.

Please share this interview with your colleagues and friends.